With Compassion, Resilience and Grit, George is Making a Difference 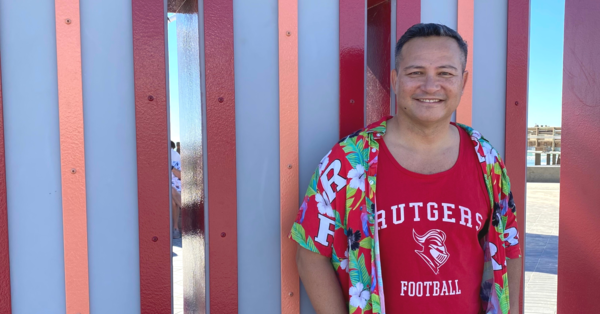 Meet George, a manager of integration program management in the product and technology organization, who is based in Arroyo Grande, California. He has over 20 years of experience in business analysis and project management and is leveraging his skills to help make a difference.

In this monthly blog series, we shine a light on Procorians across the globe who are living our values of ownership, openness and optimism as we work to improve the lives of everyone in construction. They are Groundbreakers in every sense of the word, and these are their stories.

Can you tell us more about yourself?

I was born and raised by my grandparents in Zamboanga, a city in the Mindanao region of the Philippines. After my grandfather died, I emigrated to New York City at the age of eight to live with my mom. Compared to the Philippines, New York was a huge transition and frankly a bit scary. Learning a new language and assimilating into the culture was extremely challenging. I attended Xavier high school in Manhattan and played football and rugby, which was a big commitment since we didn’t have a field and had to commute to practices by chartered bus and subway. After high school, I went on to attend Le Moyne College in Syracuse, New York, for three semesters before I transferred to Rutgers University in New Brunswick, New Jersey, and graduated with a degree in history.

In 1990, I married my best friend and soulmate, Lora. She’s been my spiritual, moral and ethical North Star ever since. We reside in Arroyo Grande, California, and have two beautiful children together who we are incredibly proud of. Our first born, Julia, got married last year and owns and operates a restaurant business with her husband. Our second child, Valerie (Vee), recently shared her true authentic self as a trans woman and graduated from San Jose State with a degree in anthropology.

I consider myself to be a very compassionate person and I’m deeply committed to my family and relationships. I love meeting new people, and at my core, I just want to make a difference somewhere in the world.

Can you describe your path to Procore?

After graduation, I didn’t know what I wanted to do for a career, so I got into the insurance industry and did business analysis work with American International Group. I then moved into consulting for companies such as Merrill Lynch, Citigroup and Credit Suisse First Boston. After the September 11, 2001 attacks, a lot of consulting work dried up, so I built a painting contracting business from the ground up. It was a chance to wear many hats, and I learned a lot about what it takes to make a business survive. It was exhausting work but something I’m still very proud of to this day. I ultimately realized that running my own business wasn’t my passion, so I sold everything and went back to consulting.

The next chapter of my journey took me to the Bank of New York as they were merging with Mellon Financial Corporation. I joined as a business analyst and eventually became a project manager at a time when there was a lot of integration work due to the merger. I was there for 12 years until they underwent significant downsizing and I was laid off. Being let go was scary, but it also pushed me to envision my dream job and company. I knew I didn’t want to work at a giant corporation where I felt like just a number again, and that’s when Procore found me. I was recruited on LinkedIn, did my research, read Tooey’s story and fell in love with the company. It made me realize, “Wow, Procore is a place I can call home.”

What has your Procore journey looked like so far?

In July of 2019, I started with Procore as a project manager for the information technology department. After two years in that role, I joined the global talent organization (GTO) as a senior project manager. This month, I transitioned into my new role as a manager of integration program management with the product and technology organization, specifically to build out the project management arm that’s focused on mergers and acquisitions integrations. Deciding to leave the GTO team was really difficult, but I’ve always had aspirations for management and building teams. This was an opportunity I couldn’t pass up and I’m really excited to see where it leads.

Project management is fascinating because as project managers, we bring disparate groups of people together to work towards a collective goal and land a metaphorical project plane. It’s also where Procore's values of openness, ownership and optimism come into play because those same values that make a great company also make successful projects. You need optimism to overcome roadblocks, ownership to stay on top of tasks and step up if you drop the ball and openness to communicate with stakeholders or ask for help. In a nutshell, project management is a great blend of science and relationship building. I hope to also bring an element of fun to the table—I believe communication, collaboration and innovation improve when people are engaged.

After George Floyd was murdered, I took a long, hard look at myself and where I was responsible for senseless acts such as this that are taking place. I realized that I wasn’t involved enough—I stayed on the sidelines; I stayed safe and wasn’t more vocal about the injustices in the world. After a lot of introspection, the opportunity arose to partner with Procore’s Diversity, Equity, Inclusion and Belonging (DEIB) team as a project manager. I decided this was a chance to help make a difference and join forces with some incredible folks. Together, we’ve brought many initiatives to life such as the True to Your Core/Wellness Week Off, the Internal Diversity Report, the implementation of Benevity (a volunteering and charitable donation-management platform that’s coming soon), as well as initiatives with Procore’s Employee Resource Groups (ERGs).

I love what’s been happening and I’m so grateful to be a part of it. I will continue to stay involved with Procore’s ERGs, particularly the API (Asian and Pacific Islander) and PRISM (Pride, Raising awareness, Involvement, Support and Mentorship for Procore’s LGBTQ+ and allies) branches, and will continue to support the DEIB team’s journey as a fierce ally.